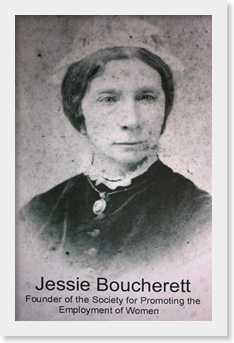 . . . our charity, which was originally entitled The Society for Promoting the Employment of Women (SPEW) was founded. It was the brainchild of Miss Jessie Boucherett (1825-1905), the youngest daughter of the High Sheriff of Lincolnshire, Ayscoghe Boucherett.   In 1926 we became known as the Society for Promoting the Training of Women and in January 2014 our name changed  to Futures for Women (FfW).

Jessie Boucherett’s wish to do something to help women was given impetus after she came across a copy of the English Woman’s Journal, which seemed to her to reflect her own aims. She was also particularly affected by an article drawing attention to the plight of the many ‘superfluous’ women in England during the mid-nineteenth century, which had been published in the Edinburgh Review. Women were considered superfluous insofar as there were far more of them in the population than there were men, and therefore many thousands – particularly those from the middle classes who were prevented by social conventions from carrying out paid employment – had little hope of being supported by a husband. Unless women had fathers or brothers in a position to provide for them, they would thus be forced to find ways of earning a living. This was very difficult, as there were very few ‘respectable’ choices of remunerative employment open to ‘ladies’ – only occupations as governess, lady’s companion, or seamstress, all of which were thoroughly oversubscribed and underpaid.

An unexpected recruit to feminism

The original article from the Edinburgh Review which had so inspired Jessie Boucherett had been written by Harriet Martineau, and included the information that ‘three out of six million adult English-women work for subsistence, and two out of three in independence. With this new condition of affairs, new duties and new views must be accepted’.

The effect on Boucherett was life-changing. She wrote later that…

at once [she] resolved to make it the business of her life to remedy or at least to alleviate the evil by helping self-dependent women, not with gifts of money, but with encouragement and training for employments suited to their capabilities

Her activities from that moment turned her into what Olive Banks, the social historian, has termed ‘an unexpected recruit to feminism’ (presumably because of her ‘lady-of-the-manor’ upbringing), and one who used her considerable intelligence, as well as her wealth, to help change women’s lives.

After Jessie Boucherett had introduced herself to the editorial team of the English Woman’s Journal and had met the other ‘ladies of Langham Place’, she was joined by one of them, Adelaide Procter, in gathering support for her venture, which was to set up what quickly became the Society for Promoting the Employment of Women (SPEW).

Their aim was to maintain a high profile for their activities, in the press and by lobbying influential Members of Parliament, as well as using their considerable social networks to influence ‘people in high places’ to employ women. They attracted many important figures to serve on the committee: for example the great Lord Shaftesbury was the President of Society for the Promotion of Employment of Women from its launch in 1859 until his death in 1885.

One of SPEW’s many successes was to have women accepted into the clerical branches of the Civil Service; but there were many other pioneering innovations for which we can claim credit, as the charity:

In addition, SPEW made it possible for many girls to be apprenticed in a wide variety of other occupations which had previously been open only to men, such as china-painting, gilding, hairdressing, photography, telegraphy, and watch-making.

SPEW can also claim other important ‘firsts’, such as:

This latter struggle involved Miss Mary Harris Smith, who had been one SPEW’s pupils in a book-keeping class during the early 1860s, and who was aged 75 when she was finally given the honour of being the first woman in the world to gain admittance to that Institute in 1920. (The previous year, 1919, she had become the first and only woman to be elected to Honorary Membership of the Society of Incorporated Accountants and Auditors.)

As the nineteenth century drew to a close, and the advent of the telegraph, the typewriter and the telephone saw the demand for clerical labour increase, women were at last being accepted in larger numbers into the workplace (although not at the same wages as their male colleagues!). Therefore, by the 1890s many of the ‘battles’ had been won, and even though further ventures are catalogued in the archives relating to the period between the twentieth century’s two world wars, there was less need for SPEW to pioneer new areas of employment or provide training facilities.

During the 20th century efforts concentrated on helping women by awarding interest-free loans for the costs associated with studying advanced degrees.   Applicants applying for assistance were studying a range of subjects including Music Therapy, Forensic Archaeology and Anthropology, International Economic Policy and Cultural Heritage and Museum Studies, rather than the crafts and skills to which nineteenth-century applicants aspired.

Our extensive archive has been held in the library at Girton College, Cambridge, since 1997.

Whilst continuing to spearhead SPEW for the rest of her life, Jessie Boucherett became involved in many other aspects of the women’s movement, and in the process developed an impressive feminist identity. The importance of the contribution she made to that movement has been largely overlooked by historians. It was Jessie’s immediate donation (of a sum equivalent to at least £2,000 today) offered during a discussion with Barbara Leigh Smith Bodichon in May 1866 which helped the campaign for women’s suffrage to get off the ground. On notepaper headed ‘Society for Promoting the Employment of Women in connexion with the NAPSS, 19 Langham Place, London’ Bodichon wrote to John Stuart Mill’s daughter Helen Taylor, suggesting that the latter should draft a petition to gain the vote for women. Bodichon wrote:

Miss Boucherett who is here puts down £25 at once for expenses. I shall be every day this week at this office at 3 p.m. Could you write a petition – which you could bring with you.

The tradition of helping women to help themselves, which Jessie Boucherett spearheaded, continues today in the twenty-first century.

A radio drama about Jessie Boucherett that was first broadcast by BBC Radio Lincolnshire at the end of 2015, is now available on the BBC website

The play is called “The Forgotten Suffragette” and was produced by Proto-type, alongside the University of Lincoln, supported by Arts Council England.   As Jessie was born and lived in Lincolnshire the University was keen to highlight the important work of a daughter of the county and bring knowledge of her important work to a wider audience.  If you have a spare hour please listen to the drama – we are sure you will enjoy it and be fascinated to hear more about the work and life of a remarkable lady.

Notes compiled by Dr Anne Bridger, FfW research associate, who also co-wrote, with Ellen Jordan, a book on the history of the Society:
Timely Assistance – the work of SPTW from 1859 – 2009.

Copies of the book can be purchased for £15.  Please send a cheque payable to Futures for Women to the Secretary, Futures for Women, Archway Cottage, 2 Church Street, Marton, Rugby CV23 9RL.

To consult the archive at Girton College, Cambridge CB3 0JG, contact the archivist e-mail: library@girton.cam.ac.uk or visit the JANUS website.