Our Trustees were once again impressed with the quality of potential grantees short-listed for interview on 18 March 2014.  Firstly we met a jewelry designer who is in the final year of her practice-based PhD and saw some examples of her African-inspired work.  We then heard from a young woman who will be studying an MA in Critical Theory at the University of Sussex.   The candidate who will be studying Russian at the University of Oxford gave us some background information on the current situation in Crimea and finally we met a woman whose career ambition is to work for the United Nations on international development issues. 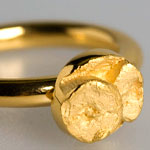