The trustees of Futures for Women are delighted to announce that they have chosen to fund the charity The Sharan Project as their first project partner.

The Sharan Project is a national charity that supports vulnerable women, particularly from South Asian communities in Britain, who have experienced persecution, domestic violence, forced marriage, honour based abuse and other forms of cultural conflict. The Sharan Project provides them with the tools to lead an independent life without fear and realise their full potential. Over the next 2 years Futures for Women will make a grant of up to £29,000 to part-fund a Sharan Project programme which will seek to create realistic employment opportunities for 2 groups of 20 women, based in Birmingham. The women will be supported to overcome the barriers and challenges they may face in securing employment opportunities towards financial independence. The programme will also involve partner organisations to deliver on employability training, makeover, interview coaching, and benefit related support. 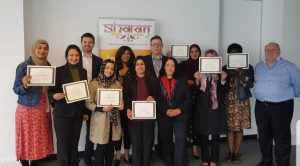 na Murray, said “Part-funding an employment project run by a charity partner is a radical change of direction for Futures for Women. But our Trustees are confident that this new direction would have the full support of our founder Jessie Boucherett, who pushed hard against boundaries in the 19th century in order to give women the opportunities to carve out a career of their choice. We are excited to be supporting the Sharan Project programme for the next 2 years and look forward to meeting the participants and hearing of their employment successes. Its programme will also reduce social isolation and the risk of abuse, increase self-confidence and create a new network of friendships which will change lives forever”.

Polly Harrar, Founder and Trustee of The Sharan Project said “We are delighted to be working with Futures for Women, we recognise that economic abuse can have a lasting effect for women who have experienced abuse. This programme is designed to empower women to rebuild their lives towards independent living without fear.”

The work of the Sharan Project (registered charity 1149094) can be viewed on their website www.sharan.org.uk