The Fawcett Society, Lincolnshire branch, and Futures for Women are jointly submitting an application to English Heritage for a blue plaque to be installed on the house in London where Jessie Boucherett lived for a period of five years whilst she was working on women’s suffrage issues.   The house in Kensington is still a private residence and so, if our application is successful, we will need the permission of the current house owner before any plaque can be installed. Currently only 13% of London’s 902 blue plaques recognise women so it would seem fitting that our application on behalf of Jessie should be accepted!  We will know the outcome of the application in October 2019 and it is a competitive process with only one out of five applications being successful.

Following our strategic review, held in the first half of 2018, Futures for Women Trustees decided to cease the awarding of interest-free loans and seek to work with a partner organisation to support disadvantaged women into the workplace.  A request for expressions of interest from charities who wanted to work with us in this regard was advertised and several charities responded.  The Trustees are now reviewing the expressions of interest received and will be undertaking a short-listing and due diligence exercise over the next few months.  It is expected that we will announce our new charity partner in March 2019.

Futures for Women is looking to change direction in how it helps disadvantaged women in the UK attain their career ambitions and become financially independent.   Established in 1859, we have a long history of supporting women into employment. We are now seeking to part-fund a project led by a partner organisation and have up to £30,000 available over two years (2019/20 and 2020/21).  The project should help disadvantaged women gain paid employment and we are flexible as to how this support is offered, the location and the type of employment attained.

Expressions of interest in working with us are invited from UK registered charities, with details of the proposed project, including target beneficiaries, set out in no more than 500 words. In addition an outline budget should be provided.  Please send expressions of interest to our Secretary, Jane Hampson, on futuresforwomen@btinternet.com by 9 November 2018.

If you have any queries about our new direction please contact Jane Hampson by email.

‘Vote 100’ and the centenary of some women gaining the vote have seen the profile of Jessie Boucherett being raised in her home county of Lincolnshire this year.   During the summer the town of Market Rasen, which is near to Jessie’s family home at North Willingham, hosted an exhibition in its Old Magistrate’s Court which showcased the work of Jessie and her sister Louisa.  The exhibition was collaboration between the Town Council, Rase Heritage Society, Fawcett Society and University of Lincoln.  Angela Wilson, Anne Egglestone and Angela Stubbs of the Fawcett Society undertook all of the research for the posters on the life of Jessie, helped with information from our book “Timely Assistance”.

On 7 August a private viewing of the exhibition was organised and Dr Anne Bridger (co-author of “Timely Assistance”) and our Secretary, Jane Hampson, were invited along to take part in a post-viewing informal discussion.   After the invited guests had had a chance to read all of the information about Jessie and Louisa, everyone sat down over drinks and cakes to hear more about the life of Jessie and the current work of Futures for Women.

A local photographer came along to capture the event and excellent coverage of the exhibition was gained in the local newspaper.

The exhibition has proved very successful in drawing people in from Market Rasen and Lincolnshire and has received lots of positive comments.   It is planned to take the exhibition on the road in the Lincolnshire Wolds and more work will be done on researching other influential women in a wider geographical area.

The  photograph below shows Dr Anne Bridger (fourth from right on the front row) standing next to Jane Hampson in the Old Magistrate’s Court. 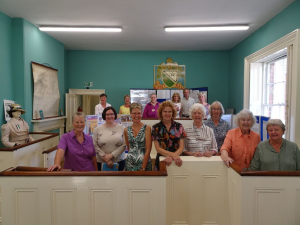 Our founder, Jessie Boucherett, has received special recognition in a project to identify and celebrate the lives of previously hidden women and supportive men who were active in the campaign for votes, leading to the Representation of the People Act 1918, and who used the extended rights to citizenship in a positive way locally.

As Jessie died in 1905 she was unable to join the “Top 100”  list of women and men who continued their activism after the vote was won.  But the judges added 20 names for special recognition by women who died before 1918 but who had nonetheless made a particular contribution to women’s suffrage.  Jessie Boucherett appears in this list.

As the UK marked the centenary of some women gaining the vote Futures for Women was proud to know that its founder, Jessie Boucherett, played a part in starting the campaign for women’s suffrage.

After establishing the Society for Promoting the Employment of Women (now known as Futures for Women), Jessie became involved in many other aspects of the women’s movement, in the process developing an impressive feminist identity. The importance of the contribution she made to that movement has been largely overlooked by historians. It was Jessie’s immediate donation (of a sum equivalent to at least £2,000 today) offered during a discussion with Barbara Leigh Smith Bodichon in May 1866 which helped the campaign for women’s suffrage to get off the ground. On notepaper headed ‘Society for Promoting the Employment of Women in connexion with the NAPSS, 19 Langham Place, London’ Bodichon wrote to John Stuart Mill’s daughter Helen Taylor, suggesting that the latter should draft a petition to gain the vote for women. Bodichon wrote:

“Miss Boucherett who is here puts down £25 at once for expenses. I shall be every day this week at this office at 3 p.m. Could you write a petition – which you could bring with you.”

On 6 February the life and work of Jessie Boucherett was featured in two BBC programmes celebrating Vote100.  Dr Anne Bridger, historian and co-author of the book “Timely Assistance” which charts Jessie’s life and work, was interviewed on BBC Look North and BBC Radio Lincolnshire.

Jessie died in 1905, thirteen years before the vote was given to some women, and is buried in North Willingham churchyard in Lincolnshire.  But her legacy lives on in Futures for Women, who continue to assist women with the costs of further education and training to enable them to become financially independent and active members of our society.

International Women’s Day takes place each year on 8 March.  This is a global day celebrating the social, economic, cultural and political achievements of women.  The day also marks a call to action for accelerating gender parity.

International Women’s Day (IWD) has occurred for well over a century, with the first​ ​March 8​ ​IWD gathering supported by over a million people in Austria, Denmark, Germany and Switzerland.   Today, IWD belongs to all groups collectively everywhere.

Each year IWD has a theme and for 2018 this is “Press for Progress”.  Futures for Women would like to call on all its members, beneficiaries, ex-beneficiaries and supporters to help accelerate gender parity.  You can make your pledge below.  Further information on IWD 2018 can be found on their website.

Futures for Women is seeking new Trustees to join its Board.  We currently comprise five female Trustees – but you don’t have to be a woman to join us!  We would welcome anyone who supports our aims and feels that can bring a specific skill to our team of Trustees – such as fundraising, financial management, strategy planning or knowledge of higher education.

We meet in London three times per year, in March, June and November, and we also hold an annual Development Day in London.

If you are interested in finding out more about the role please contact our Secretary on futuresforwomen@btinternet.com and she can put you in contact with an existing Trustee for an initial conversation. 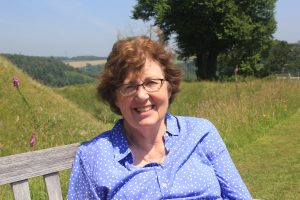 Our Trustees’ report and accounts for the financial year ending 31 December 2016 are now available for download.